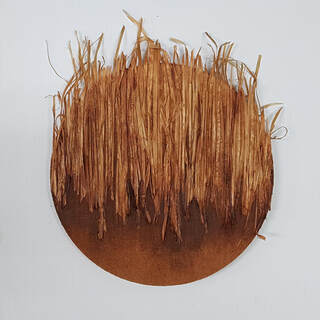 ​Ray Gallery is pleased to present Time Traveler—Haekeung Park’s solo exhibition as the first part of our Venice Biennale Project 2019, a series of exhibitions that coincides with la Biennale di Venezia.

In Time Traveler, Park presents a new body of works that visually deviates from her previous Lenticular (2018) series where she explored three-dimensionality within the two-dimensional plane and the movements within the stillness of canvas. Nonetheless, the Time Traveler series continues such exploration—the search for three-dimensional qualities in a plain field. If the aforementioned inquiry was done with an application of lenticular technique which plays with the visual aspects of the canvas, in the new series of work, Park takes a sculptural approach with a natural material that refer to the artist’s nostalgia and controversial historical ramification within the matter—hemp.

Hemp, once commonly used for multiple purposes from fabric to food and spiritual rites in many cultures, has been a controlled substance in many countries for decades due to its mind-altering component. Notwithstanding our current understanding of hemp as one of the most bandied about plant, its multitude of use has been widespread around the globe. Park’s initial inspiration to use hemp thread came during her visit to a hemp farm in Korean countryside where she found traditional hemp fabrics and products.

By utilizing a historically charged material, Park goes on to overlay modern dynamics of human and nature with the abstract images that are serene, indulgent, and intimidating at the same time, which are inspired by her nostalgia of old Korean sceneries and the complex human psyche. In describing the process of working with the hemp thread, Park recounts on memories from her childhood where her and her mother hand-sewing the winter duvet and the repetitive, almost meditation-like, yet still playful motion of swinging the thread and its likeness to the life itself. With the intention to reflect our convoluted connections with the mother nature and to facilitate understanding of obscurity of life, Park’s Time Traveler series invites the viewers to contemplate.