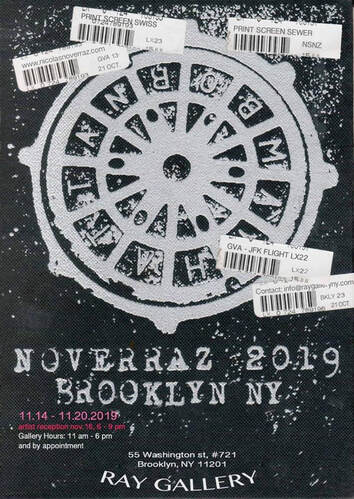 Geneva-based Swiss artist Nicolas Noverraz makes his Brooklyn debut at Ray Gallery. An urban visual artist, Nicolas is interested in the artefacts humans leave on the landscape. Contrary to appearances, his appreciation of nature compels him to paint the urban world. The underlying message is subtle, a slight nudge: without passing judgement, he bears witness.

Nicolas has an eye for the details and fragments of city life that often passed by unperceived. But his attention to detail gives these everyday urban objects a special status.

Since his first exhibits in 1999, Nicolas has created works that range from hyper-realism, to art-objects and mixed media sidewalk pieces, "all subjects related to the state of the planet, an issue that worries me."

​The Brooklyn exhibit showcases his original screen printing technique. Nicolas revisits manhole covers adding a touch of color, originality, pop. We look differently at the objects we trod upon every day. What does that moment in time or place signify for the viewer?

These pieces challenge the viewer to reconsider what is commonly considered beautiful, daring them to find beauty in objects not usually considered by society.

Nicolas keeps inventing, imagining, "I’m open to everything; I want to have fun,&quot; he admits, "An artist must be creative. Good technique is not enough. For an artist, creativity is all the time, everywhere.“

Adapted from a text by Jef Gianadda


​​The painting of Nicolas Noverraz epitomizes a hyper realism, first by the choice of his subjects and secondly by the way he treats them. His interests are generally urban, he does not try to hide dirt or degradation. Noverraz demonstrates extreme technical precision when realizing his paintings, not a detail is missing when compared to the reality.
​
Nicolas Noverraz often makes close-up pictures of his subjects, which in certain cases gives an interesting luminosity to his paintings. His canvases are often taken for abstract paintings because of their decontextualization and their fineness of realization. Through his work Noverraz creates a continuum between two opposing currents: hyper-realism and the abstract. The border which separates these two currents is very tight but Noverraz tips from one world to another with virtuosity.
​
At present the artist is developing a new concept, defining himself as an “urban visual artist”. From the city, for the city. This definition suits Nicolas Noverraz marvelously who, while focusing on cities, voluntarily immerses himself in a cherished and familiar environment. Since then, his stomping grounds have multiplied. However, his lexicon invariably shows the marks wrought by humankind, traces of time or decay.

The artist inaugurates this new concept in a series of subjects in which elements for our daily life are brought to the forefront. All things we see for a brief instant, sometimes even without being aware of it. The artist focuses our attention urban signage, without which it might be difficult to orient ourselves, but the importance of which we are rarely conscious.

In fact, Nicolas Noverraz has made himself, from now on, the spokesperson of all these daily objects without which our daily life would not be what it is.
​
Nicolas Noverraz lives and paints in Geneva since 1996. He has travelled for his art and his work can be found in many private collections around the world in Japan, USA, United Kingdom, France and Switzerland. 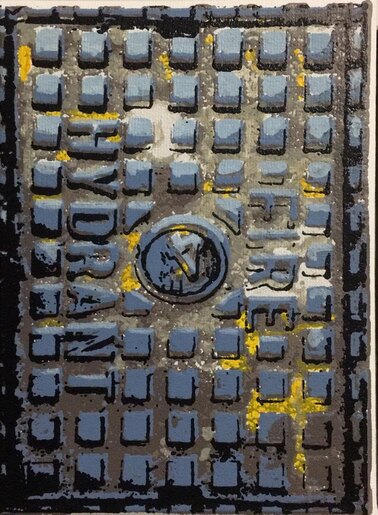