​
" A great force emerges from his sculptures that seem to mock the laws of gravity. Using the chair as a symbol, his art speaks on power, hospitality and society." ­ 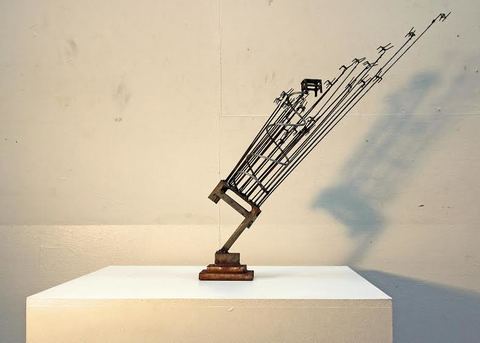 Senegalese and Swiss Artist, living in Geneva, Switzerland, he teaches visual arts at Seymaz Middle School and also has a studio in Jonction.

Ousmane DIA attended The Dakar National School of Art for four years and graduated in 1997. He continued his studies in Geneva at the Graduate School of Visual Arts,and graduated with in 2001 with a specialization in sculpture.

Since 1999, Ousmane has had solo exhibitions in Switzerland, in Geneva, Sierre, Basel, Morges, Neuchatel, as well as in galeries throughout France and of course in Senegal. In 2002, his work was exhibited at the Art Biennale of Dakar in the Toukouleur Gallery. In France, his work was shown at the Casa Mansa Gallery in Lyon; the “Pla C’est Bo” Gallery in St. Etienne; and at the World Cup Hall in Yssengeaux.

In 2003, Ousmane presented several exhibitions: at the Ndajé Gallery in Morges, Switzerland; at the Villa Douce at the University of Reims in France; in the Hall of the Lost at the World Trade Organization in Geneva; and also during the Senegal Days celebrations organized by the cultural center of Plan-les-Ouates, Geneva.

In 2004, he presented his sculpture titled “Homage to Odell Barnes Jr.” at Dufour Hall of the University of Geneva. In 2008, the Hohlraum11 Gallery introduced his work to Art Basel. In 2010, he produced a performance followed by an exhibit in Paris at the Faculty of Geography at the Sorbonne, in response to Nicolas Sarkozy’s speech given in Dakar. In 2011, he presented his work at the Julienne Center for Arts and Culture in Plan-Les-Ouates. In 2012, the Cologny Manoir in Geneva hosted his work as a solo exhibition.

The artist also participated in a number of collective exhibitions in Europe as well as in Africa.
In 2002, he presented a maquette of the symbol of the United Nations Palace as part of the Swiss National Exhibit « Expo02 » at the Island art center and at the United Nations Library in Geneva. The final sculpture, made entirely of metal and measuring six meters high, with six meter diameter, was shown at the Arteplage in Yverdon, Switzerland that same year.

In 2013, Ousmane participated in the “Humanity” exhibit at the John Knox Center in Geneva, where he presented his sculpture called “ Homage to Odell Barnes Jr.”, which he also showed at the Art in the Country in France, for which the organizers bestowed upon him their Committee Prize.

In 2014, he was a part of several collective exhibitions: at the Nest Galerie in Geneva, in relation to the Dakar Biennale; the World Organization of Meterology in Geneva; the IFAN Museum in Dakar, Senegal; at the Ruine Galerie and at the United Nations in Geneva.

Ousmane Dia works with wood and recycled metals, demonstrating his respect for the environment and man-made materials. His process involves taking using materials from a cycle which has been interrupted, following the journey of the material and recovery of its history.

Seams of metal, burn marks, layering, accumulation, composition, balance and imbalance mastered, the work of Ousmane DIA mixes traditional and innovative technical processes in a language rich in his original culture, formal and bearing his individuality.

The theme is strong, the names of the works speak for themselves, some exhibition venues are sometimes highly symbolic. The works of Ousmane Dia challenge by their relative ease of approach and yet ... the harmony and balance undergoing the ravages of time and rust with such control must remind the public that the breaking point so close is unlikely to be solely the will of the artist.

"The internal soil is fertilized by new experiences, discoveries and rediscoveries; roots take the scope and the genuine need to move to the creative act is affirmed in the steps which follow. "-