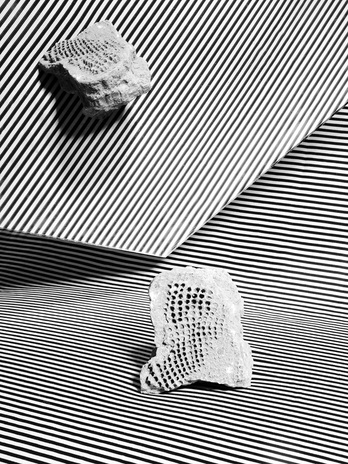 Fossil, Ryan Duffin, 2015
Ray Gallery is pleased to present Ryan Duffin: Grounded Hallucinations, a collection of photographic works, each of which investigate into the phenomenon of visual perception.This project explores the translation between the retinal image and the brains interpretation of these stimuli. Through the use of visual illusion, color, and pattern Duffin en- courages the viewer to encounter and question the physiological effects of these optical occurrences. The images in the show manifest in a scientific, yet playful approach to picture-making. Within this exploration we are presented with macro photographs of pixels on computer screens, still lives of 3d prints and fossils, as well as a digital photogram. The name Grounded Hallucinations is a metaphorical way of thinking about the reliable nature of the camera as a tool and the unreliability of actual human vision.

Ryan Duffin’s work focuses on Human perception—what happens in the translation between the retinal image, and the brains interpretation. Consistently, there is an element of spiritual and/or scientific exploration within his images. He explores the physiological nature of seeing through focusing on color, perspective, measurement, pattern, and chaos. Photography is the method in which he organizes the overlap between what we can explain and what we cannot, the known and the unknown, the facts, and the mysteries. His works have been featured in numbers of publications including BULLETT Magazine.
​
Duffin was born in Alberta, Canada and currently resides in Brooklyn, New York.
Back