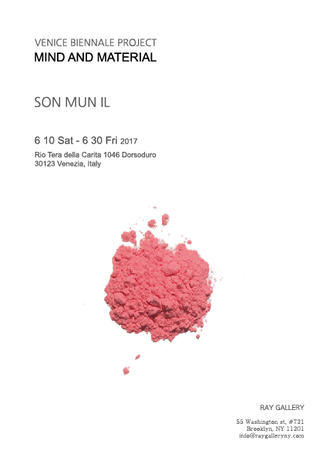 Son Mun Il’s work begins from the search for the essence. Exertion to reach the root, the essentials of the ob- jects is not a new topic for the artists. With the in uence from the essentialism of the Roman era that chased ‘Idea’, the endeavor to seek for the basis and to take after the forms has always existed in both western and eastern history of art. In this context, it is needless to say that Son Mun Il had endless attempts of reproduction. Reproduction does not mean the exact re-creation of the objects or the ideas but it is more like the re-interpretation of the objects and the ideas created by the artist’s unique point of view, the artistic prism. Son clearly perceives that representation is the process of revealing the artist himself and the he emphasizes his role as the medium between the artwork and the objects. In his early works, the artist minimized his role in order to show the essence, however gradually changed through process, to strengthen his role and expanded his part as a medium.

What Son Mun Il had focused the most, in the beginning, is the objects that could easily be found in the ordinary scenes, things could be found in the surrounding areas such as tables and chairs. At the time, Son’s interest on the ‘Es- sence’ was merely bigger than imitating as it can be seen from his rst solo exhibition in 2010 of which the artist cuts the objects along its angles, then attaches the wood veneer then applying the paints using airbrush where it gave the artwork three dimensional look on the at surface. However, Son’s work, through practice and study on various ways to portray the essence of the objects, he nally realizes that the texture of the fabric could be a way to reveal the ‘Essence’.

​In his second solo exhibition at Gong Art Space, Son presented a series focusing on the texture of the fabric. Son Mun Il expressed the rough texture of the suit, the dropping of the soft fabric, and the clinging feeling and the layering of the thin fabrics, in various ways. What he portrays through this series cannot be considered to be the exact representation of the existing object where ‘preparation1’ and ‘relationship2’, the unrelated geometric shapes are presented.

What needs to be pointed out is that Son Mun Il does not limit his work only to be the medium between the ob- jects and the artwork. In order to re-present and to express the essence, Son does not curtail himself but he stands him- self out by separating the gures, or by adding the geometric shapes of the basic elements. For revealing the artist on the work, the objects partially lose their basic identity by being hidden behind the fabric and other distortions. But the objects willingly sacri ce themselves for the new image of the artwork.

Son Mun Il’s work repeats the process of ‘creation, extinction and the change’. This repetition resembles the law of the jungle, In order to create the desired image; Son rst chooses the objects in the surroundings. Then he collects data on the chosen objects and goes through the editing process. Like the law of the jungle, only the stronger images survive. The reason for the artist to choose the images is very intuitive. The objects were chosen only because they existed in the surroundings. Son never clearly explains the particular reason for choosing the objects or the images. But Son states that the reason for the absence of the faces in the men in suits is because the facial expressions would break the visual balance.

The images that Son Mun Il presents is the newly created entity, it cannot be de ned in certain way and it rejects any kind of regulation. Therefore, the viewers only can show the sensual, intuitive reactions. The viewers focus more on the image that the artwork gives, than focusing on what type of object it is or who the person wearing the suit is. And the viewers naturally draw sensual feelings, and they cannot be actualized nor de ned in a word. ‘Grotesque’ cannot conclude ​the shape of the work without face and the abnormally portrayed shoulder, ‘ambiguous’ cannot de ne the image of the red silky textured object.

​Intuitively selected covered images and the lined fabrics are granted with the new life and the viewers ignite the visual, auditory and sensual languages and contribute to the energy that the unfamiliar images spurt. The young artist’s passion to create the image that reveals the ‘Essence’ nally creates an image that portrays his own ‘essence’. And the artists who were seeking to express the essence exist not merely as a medium but now exist as one signi cant exible existence.

The ambiguousness and the unpredictability is the strength that Son’s works have. The chosen images go through the change process in order to have the new image and this is expanded like the cell division. One more interesting thing to be pointed out is that Son’s work are done on at surface but they portray the three dimensional images, and they are all intentionally created through modeling the actual object then painting on the top. Also, the objects seem to lose their essence but instead it frankly suggests. In ‘relationship’ and ‘preparation’ series, the mixture of the suit and dress with the geometric shapes are all related to the essence part, for example, the geometric shape from ‘relationship
1’ is silicon crystal which is one of the basic elements and the top of the ‘preparation 2’, there exist the brush which is the essence of the painting. This is the result of Son never limiting his work in representation, recreation but he penetrates the whole work. This proves that Son enjoys studying the topic ‘Essence’, rather than being obsessed or agonizing. Therefore the viewers, we can nally accept the artist’s twist and play on mixing the geometric shapes with the objects.

Son Mun Il gazes the plane over the actual visualization. This is the noumenon of the essence. Son explores the area of substantial existence and he suggests through his work. Son Mun Il’s work evolves. Genuine yet inexorable approach, elaborate observation on the object and the details are Son Mun Il’s strength in exploring the ‘Essence’. 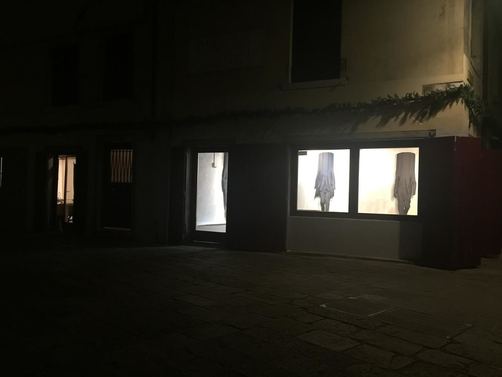